Kazimierz Nowak was born on 11 January 1897 in the town of Stryj in the Podole Region of Poland. After the first world war he moved to Poznań and started working in an insurance company. At that time he also took part in bicycle trips around Poland and pursued his passion of being a traveller and photographer. On the19th of March 1922, Nowak married Maria Gorcik and their daughter Elżbieta was born in the same year. Their son Romuald was born in January of 1925.

In the years of crisis, in March 1925, Nowak decided to leave the country to earn a living as a press correspondent and a photographer. He made two trips across Europe on bicycle, visiting Hungary, Austria, Italy, Belgium, the Netherlands, Romania, Greece, Turkey on the way. In 1928 he reached Tripolitania in Northern Africa, which was then at war. Health problems and a shortage of money forced Nowak to return to Poland, but he decided that one day he would cross the whole African continent from north to south. Meanwhile he continued to cycle in Poland, went to France and at the same time made preparations for the trip to Africa.

He finally set out in October 1931, first by train to Rome, then by bicycle to Naples, where he took a boat across the Mediterranean Sea. On 26 November he returned to the Dark Continent. On his seven-year old well-worn bicycle he started from Tripoli in the direction of the Cape Agulhas, more than 12 thousand kilometres southwards. When he reached the oasis of Maradah on Holy Saturday of 1932, he aroused panic among the officers on duty at the Zone Headquarters. Nobody could understand how a cyclist from Poland had ended up in the middle of the desert. Due to the turbulent situation in Cyrenaica the Italian authorities ordered Nowak to change his itinerary and to travel through Benghasi to Alexandria in Egypt. There the traveller turned southwards again. Along the Nile and the route of African Great Lakes he moved to the centre of the continent which was teeming with its own unexplored life. The echoes of the world events reached him from far away – the Great Depression, or fascism in Europe seemed so unreal in face of epidemics raging on the continent or the sinister clouds of locust covering the sky. Travelling alone, Nowak occasionally found his way to a native village to trade some food or listen to African legends. He met Tuaregs, Egyptian fellachs who lived on the Shilluk’s swamps, the proud people of Watussi, Pygmies, Trnsvaal Boers, Hottentots, Bushmen, Babinga dwarf people, wild Abasalampasu, Hausa and many other exotic peoples of the continent, who shared the same fate of struggling to survive in the environment dominated by wildlife. And every time he set out to continue his journey, the rhythm of tam-tam drumming carried to other settlements the unusual message about the single white man travelling on a strange vehicle.

Nowak met with sympathy and encouragement only among Polish diaspora and church missions in Africa. But when he reached the settlements of white explorers, the feeling of loneliness seemed to increase, as he noticed how much he differed from the officials, army officers, geologists and hunters who came to Africa for profits, career, trophies or debauchery. Sensitive to human wrong and full of respect for intact nature, Nowak evaluated the imperial habits of Europeans in Africa in a critical, courageous and independent way, uncommon for that time. He did not rush seeing lights of another town along his route on the horizon. He’d rather stop to camp and spend one more night far away from human settlements, in the midst of his beloved African nature untouched by civilization.

Contrary to the expectations of the representatives of Maritime and Colonial League, Nowak did not share the colonial ambitions of the Polish state. Perhaps that was the reason why he did not get adequate material help and received only bicycle tyres sent from Poland by Stomil factory. Nowak obtained necessary financial means to support himself and his family with fees for reports and photographs sent to Polish and German newspapers. Nowak received the 35 mm Contax camera, purchased at the Kazimierz Greger’s photo laboratory in Poznań, when he was already in Africa. The camera allowed him to take more than 10,000 photographs throughout the whole trip. His escapade was also reported in local African press. In April 1934 Kaziemierz Nowak reached the southern tip of Africa, Cape Agulhas.

When in Cape Town, he decided to go back home along a different route, but again on his own across the whole continent.

Despite attacks of malaria and permanent financial shortages, Nowak decided to set off immediately. In the middle of the desert of South-Western Africa his bicycle fell to pieces. Nowak received a horse named Ryś (Lynx) from Mieczysław Wiśniewski, a Pole living in Gumuchab, and bought another one named Żbik (Wildcat). Ryś remained as his saddle horse, while after a few days he exchanged Żbik for another horse, named Cowboy, which he used to carry his luggage. Thus he made another 3,000 kilometres in the saddle. After a visit to the fazenda of count Zamoyski in Angola he continued without his four-legged companions.

When Nowak reached the river Kassai, he decided to turn from a cyclist and horseman into a sailor. In a boat tailor-made by the locals, named as „Poznań I”, he travelled down the rough and unpredictable river. After an accident on a Kaveve cataract he lost his new form of transport. Forced to walk for hundreds of kilometres, Nowak reached Lulua, where he bought another boat, adjusted it to his needs and, after his wife, he named it „Maryś”. In September 1935 in Leopoldville (nowadays Kinshasa in the Democratic Republic of the Congo ) he ended his two-month single voyage along the rivers of Lulua, Kassai and Kongo. The journey continued to Lake Chad, which was made once again by bicycle. The authorities of the French Equatorial Africa did not want to allow him to cross the Sahara Desert alone. They recommend he continued the trip with a caravan, in doing so he could secure sufficient water reserves. Nowak bought a dromedary, hired a herdsman and made his own caravan. He spent another five months on the rocking back of his dromedary named Ueli, until he reached Uargla. He travelled the last 1,000 kilometres from Uargla to Algiers, which is situated on the coast of Mediterranean Sea, by bicycle.

Nowak ended the journey of over 40,000 kilometres in November 1936. With the last of his money he bought clothes (it was already autumn in Europe) and a ticket for a ferry to Marseille. From there he travelled to Beaulieu near St. Etienne, where he spent two weeks in a Polish mining settlement (which he visited during his previous trips across Europe). In vain he tried to get funds to buy a train ticket and pay for the transportation of his bike to Poland by selling photographs brought from Africa and taking pictures of the miners. He went to Paris, where he arranged visa formalities to cross Belgium and Germany. Thanks to the assistance of his wife and with the guarantee granted by the tyre factory Stomil, Nowak got a loan from a Polish consulete amounting to 750 franks.

On the night of 22 December 1936 Nowak crossed the German-Polish border. In Poznań, He recognized a group of relatives and friends, in the crowd of people waiting on the platform.
After his return to Poznań, Kazimierz Nowak gave a lecture at the Apollo cinema, presenting the ethnographic aspects of the African continent, illustrated with photographs. Nowak also visited other towns and cities and delivered lectures, for example at the Jagiellonian University in Cracow and Warsaw School of Commerce. He intended to publish collected materials in a form of a book and planned another trip, this time to India and South-Eastern Asia. Unfortunately, these dreams remained unfulfilled. Nowak was exhausted with frequent recurrences of malaria and additionally he got periostitis of his left leg. He needed a surgery. During the stay in hospital he contracted pneumonia. Kazimierz Nowak died less than one year after he returned home, on 13 October 1937. 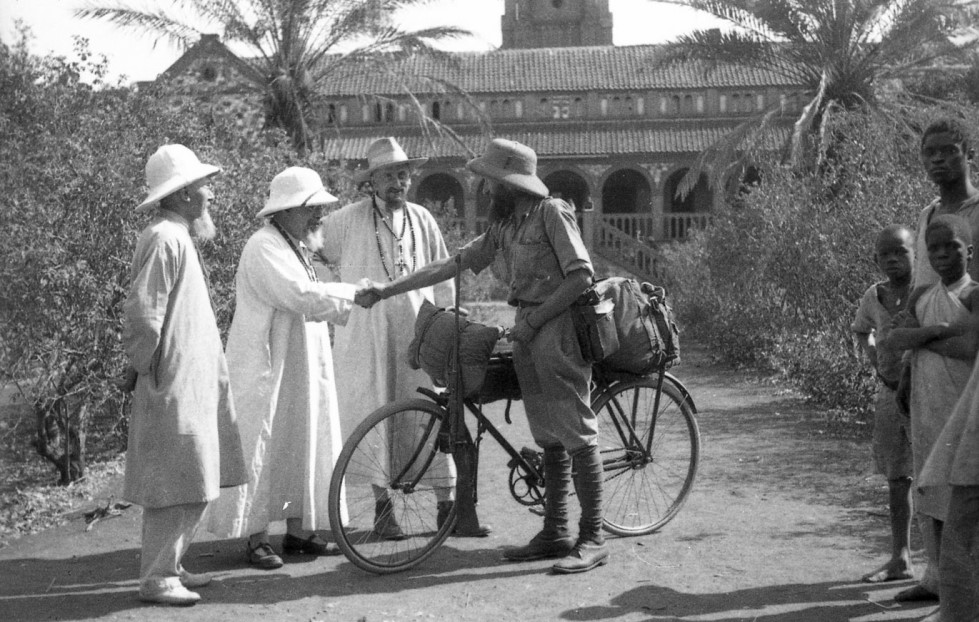